If you’re like many producers, Native Instruments’ Massive has been a staple part of your synth collection. Since 2007, Massive has been gracing many a track with its extensive library of diverse sounds, and even spawning entire genres of music. I myself have, throughout the years, used and tinkered with Massive on many of my own productions, and taken the occasional deep dive into the many sections and menus.


I always felt that -as powerful as Massive is- I wasn’t getting the most out of it, purely due to a lack of knowledge on how the different sections worked. There was also the issue of how daunting the interface is, which as we’ll find out later, has been tackled in the follow up. This point of view may have been just me though, as I’ve heard many impressive sounds people have made with Massive.


Today we are going to take a look at Massive X, the hotly anticipated follow up to Massive. Described by Native Instruments as a ‘rethought, rewired and reincarnated’ version of the synth, there’s a lot to unpack with this latest iteration. It’s available as part of Komplete 12 or as a standalone for £179 or crossgrade from the original Massive for £129.


So this week with Top Music Arts, we’ll have a look at exactly what makes Massive X tick, and explore the new features that set it apart from its predecessor. The (Re)birth of a Legend.


Native Instruments have come out with some truly powerful synths in recent years. One such is Reaktor Blocks, a digital recreation of modular set ups, allowing users to drag and drop different modules or ‘blocks’ to create unique and very convincing analog emulations.


There is a striking similarity in the new interface for Massive X with Reaktor Blocks; the sleek pale grey background, the conspicuously modular arrangement of the different sections. It almost looks like it’s been built in Reaktor Blocks. A great new feature of Massive X is that the interface is resizable, allowing it to be fit specifically to your workflow. Full screen or minimised; whatever works best for you!


A key thing to takeaway from Massive X is that despite its sleek and clean interface, there is a lot more hiding under the hood than first meets the eye. The synth perfectly balances a clarity of the interface with legible usability, without getting the user bogged down in endless menus - a feature which the original arguably suffered from. It seems like there were as many different tabs and pages in the original Massive as there were presets!


NI state the following on their website for Massive X:


Get everything you need to create any sound imaginable. Quickly patch complex routings to bring your ideas to life – no matter how far-out they might seem – and take things further than you thought you could with expressive, playable modulation. Think it up, dial it in, and define what the future sounds like.


MASSIVE X will grow, adapt, and evolve with regular free updates – both inspired by, and to inspire, the cultures it helps to create.

There are various sections of Massive X’s interface to unpack; some familiar and some new, so without further ado, let’s get into them! 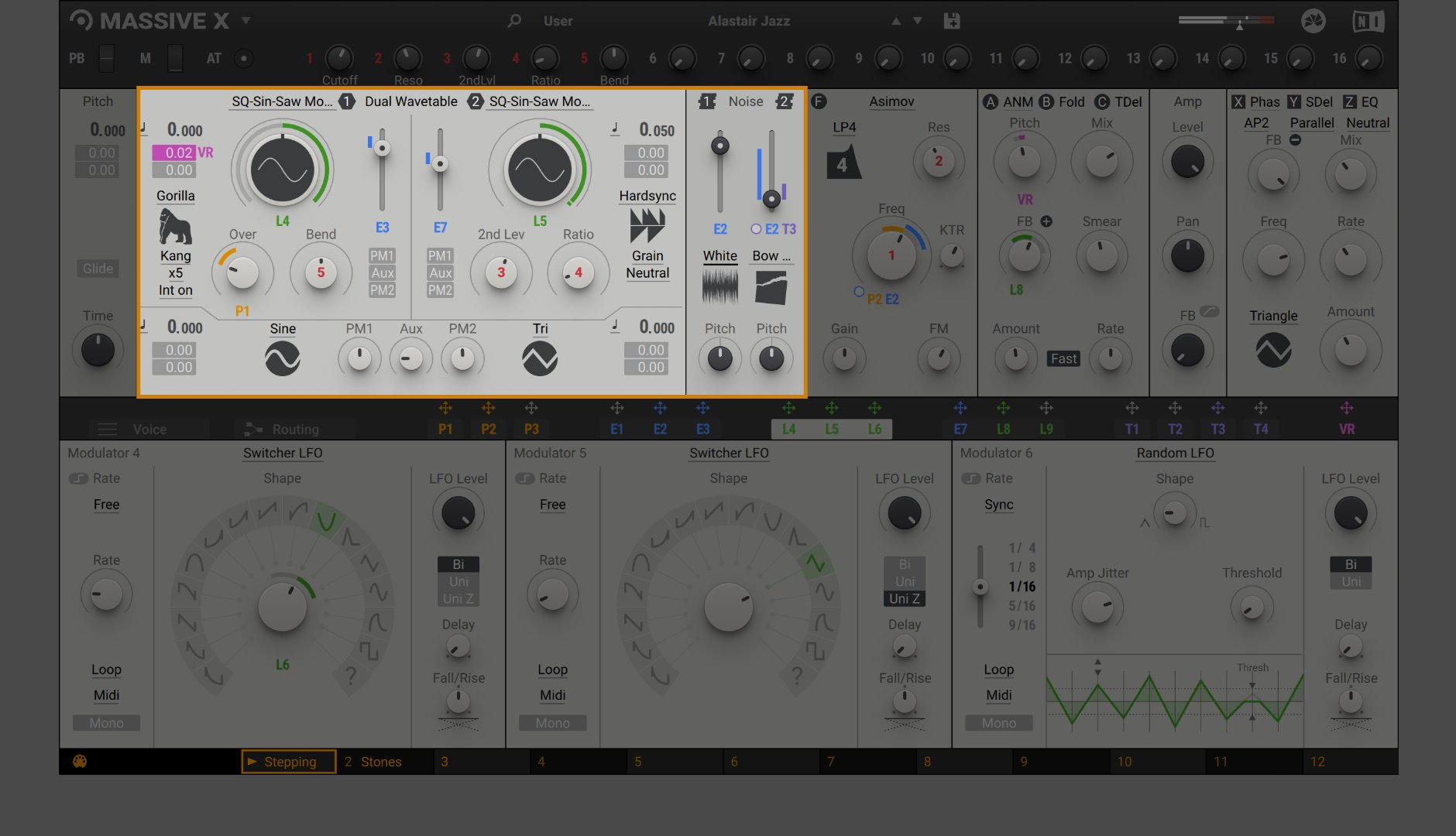 The Oscillators are both wavetable oscillators, both of them featuring around 256 wavetables to explore. Interestingly, all of these wavetables have been created by the original designer himself to showcase exactly what these new oscillators are capable of.


The two Oscillators feature ‘sets’ and ‘modes’. They have 10 different modes, some of which have up to three sub-modes, so there is a lot to play with straight off the bat. Sound is generated by cycling/reading through the wavetables generated by the Oscillators, and these modes are the different ways of doing this.


So you could play the same wavetable from an Oscillator, but changing the mode will create its own distinct character to the sound. Then these main oscillators can all be further modulated by two phase modulation oscillators (with a number of wavetables designed specifically to be phase modulated).


The key thing to take away from these Oscillators is, there is a MASSIVE (pun intended) amount of possibilities for generating sounds. The literature on the synth’s page says you can create any sound imaginable, and if these Oscillators are anything to go off, that may not be far from the truth!

A huge selling point for Massive X is the new routing possibilities. You can connect any output to any input within the synth, to generate some creative signal routing for some really unique sounds. With its huge routing matrix and a unique approach to insert effects, you can route and patch in ways a conventional modular or semi-modular can’t.


What this means is that you can basically rewire the synth to work how you want it to. You can bypass elements, you can create feedback loops, or even set atypical routing such as having a modulator as an audio source to excite other elements, such as the comb filter.


This routing gives an unprecedented level of control over the various elements of Massive X. You can simply click and drag connections around between the different modules, letting you route audio, for example, to the filter section, through Insert FX, to the feedback bus, to effects, to more than one destination at a time, and so much more.

The possibilities are endless. 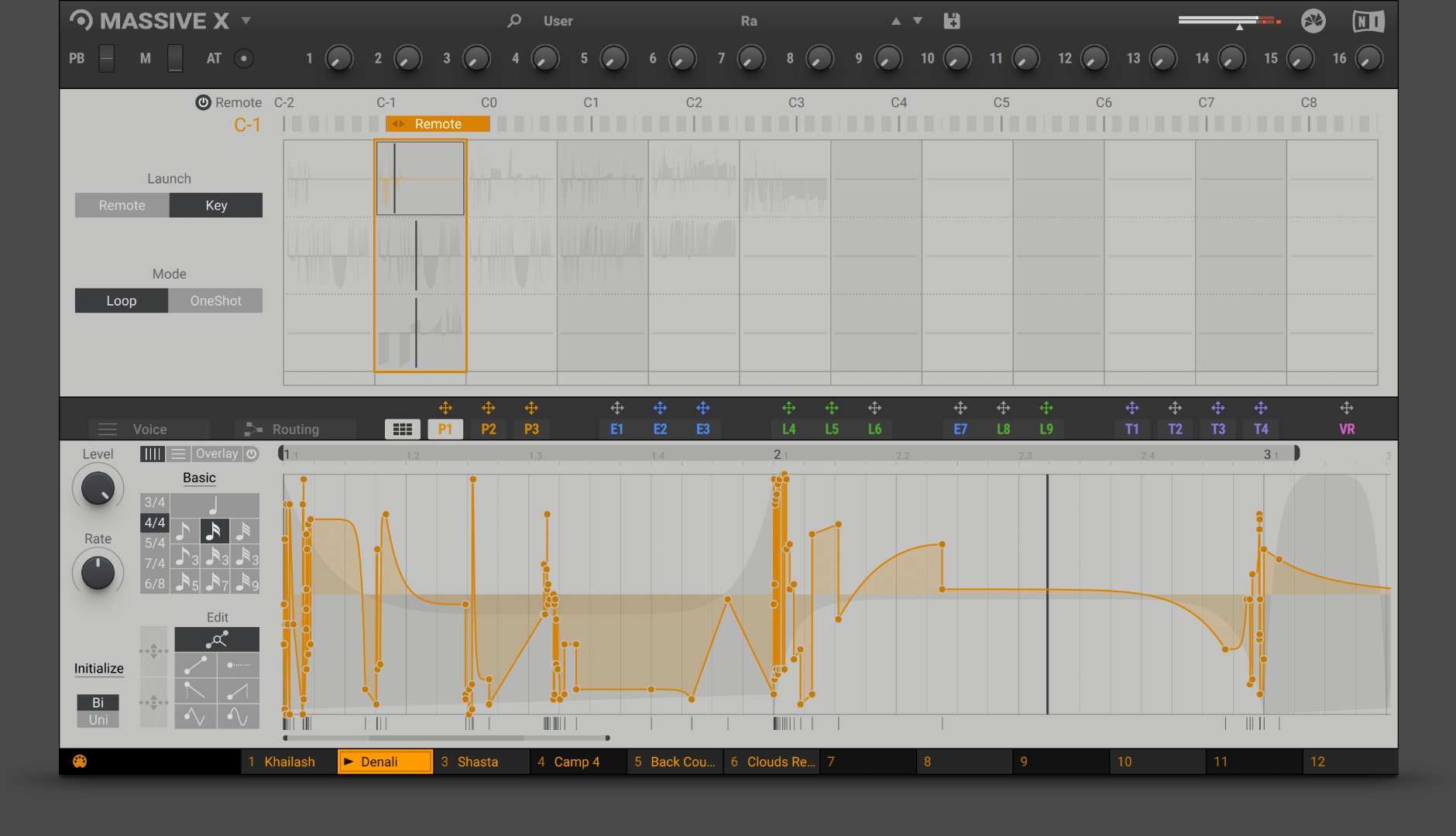 Another of Massive X’s exciting new features is the Performers. These are sections for sequenced modulation that let you draw in precise and detailed patterns for modulation over a specific time frame of up to 8 bars.


This allows you to inject controlled variation into your synth patches in this section, assigning your modulation to a specific parameter to create expressive sequences, or more out there timbres. The flexibility here is fantastic, giving you a great amount of room to experimentation.


Another great feature in this section is the ability to use the Remote Octave control to assign these Performer modulations to your keyboard, so you can trigger them as and when they’re needed to create more diversity and complexity in your sound and performances.

As you’ve probably gathered from the sections covered above, there are a myriad of different ways you can craft sounds using Massive X. This article only scratches the surface though, because -as with any synth- the more time spent with Massive X, the more results it will yield.


The addition of modular capabilities give a whole new realm of possibility to Massive X compared to its predecessor. The previous capabilities of Massive paired with the extensive and endless creativity that a modular set up provides will mean the possibilities for Massive X are endless.


It’s definitely a machine put together to encourage experimentation and creativity; the complex routing system will no doubt allow for thousands of producers worldwide to create unique sounds with the synth, and this has the potential to be as genre defining as the original Massive was.


The best way for you to experience the newest additions to Native Instruments’ roster is to pick up a copy of Massive X. It does have a hefty price tag, but there’s a free demo available to wet your whistle if you aren’t ready to commit to the full product.


Check it out, make some weird sounds, and explore until your heart’s content!


We hope you enjoyed this exploration of the features in Massive X, the latest flagship synth from Native Instruments. Make sure you check back with Top Music Arts regularly for more production tips, tricks and Ableton templates!