A large portion of the world's producers will be completely in-the-box musicians. Which simply means that they do all of their production 'inside' their laptop, using only digital softwares and plugins within an all digital environment.

Though I used to use a lot of outboard gear, these days I'm producing pretty much all in-the-box, as the demands of day to day life (and being a parent!) mean I don't have the time or the space for a complicated set up.

But on the other hand, many producers use lots of external hardware in their music production.

We recently did a guide on some of the best MIDI keyboards you could get on a budget as a beginner looking to expand your gear collection, but today we are going to focus on the other essential piece of kit for any music producer.

Now, before we get started, it's worth noting that microphones come in many different types, and in vastly different price ranges. I was recently reading about a £10k microphone which is crazy!

But don't worry, you aren't going to have to dig that deeply into your pockets to afford one of the microphones we're talking about today.

These days, getting a good quality microphone is more affordable than ever, and adding a microphone to your setup will allow to record instruments, your voice, and pretty much any audio you can think of.

So, let's take a look at some of the best microphones you can get on a budget.

The world of Microphones

There are 4 different types of microphones out there, which are generally split up based on their function, but not always. Each type is built differently, and is therefore good at a particular task.

So for this guide, we will just briefly discuss the different types of microphones so you have an understanding of what we're talking about when we list the type of microphone under each one in our list, and also what kind of microphone you're best off looking for depending on your purposes.

So the four types of microphones are:


So that's a short overview of the different types of microphones out there. We may not see a microphone representing each type in this list, it would have felt odd to leave out a type of microphone. The more you know!

So, now that we've got that covered, let's look at the best microphones out there for a budget.

The best microphones on a budget. 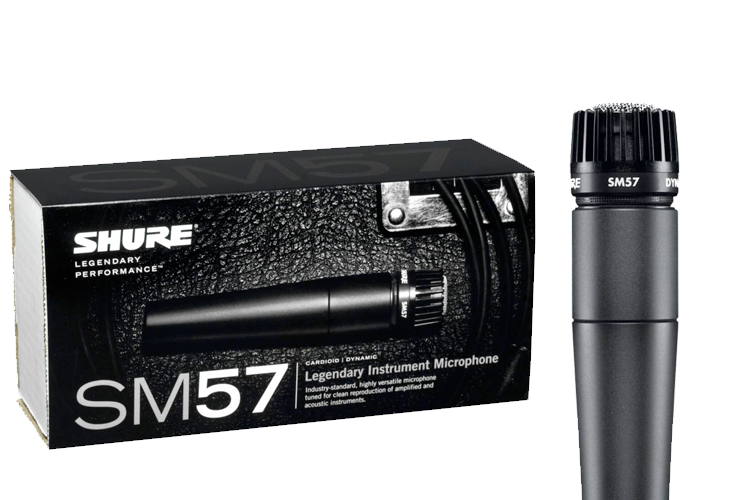 The SM57 is the microphone. It's everywhere, and for good reason. It's a super tough and durable dynamic mic, and if you've seen a band play live in the last few decades, or pretty much listened to any recorded music, you've heard an SM57.

They are the standard for this type of microphone, they're the best and most widely used out there (I have two myself), and they're really competitively priced.

Though they're primarily an instrument microphone, they work great in most situations you could put them in. The pickup pattern means they receive sound from one direction and reject the sound coming from around it, which makes it great for precision sound sources. Snare drums, guitar amps, or anything which you can point it directly at.

If you're going to choose one microphone from this list, choose this one, it can do anything! More than anything else, this microphone is probably the one a child would draw if you asked them to draw a microphone. Its shape is ubiquitous, and it's another of Shure's powerhouse microphones which is in use everywhere.

It's basically the SM57 with a few tweaks; there's the covered head, and the adjusted frequency response which boosts the mid and upper frequencies. This is the perfect microphone for vocals, especially in a live setting, because it's so robust. You can knock it about, drop it, accidentally drive over it with you car (maybe not that one) and it will still sound as good as the first day you got it.

This is the budget vocal microphone, and if it suits your needs, buy it! 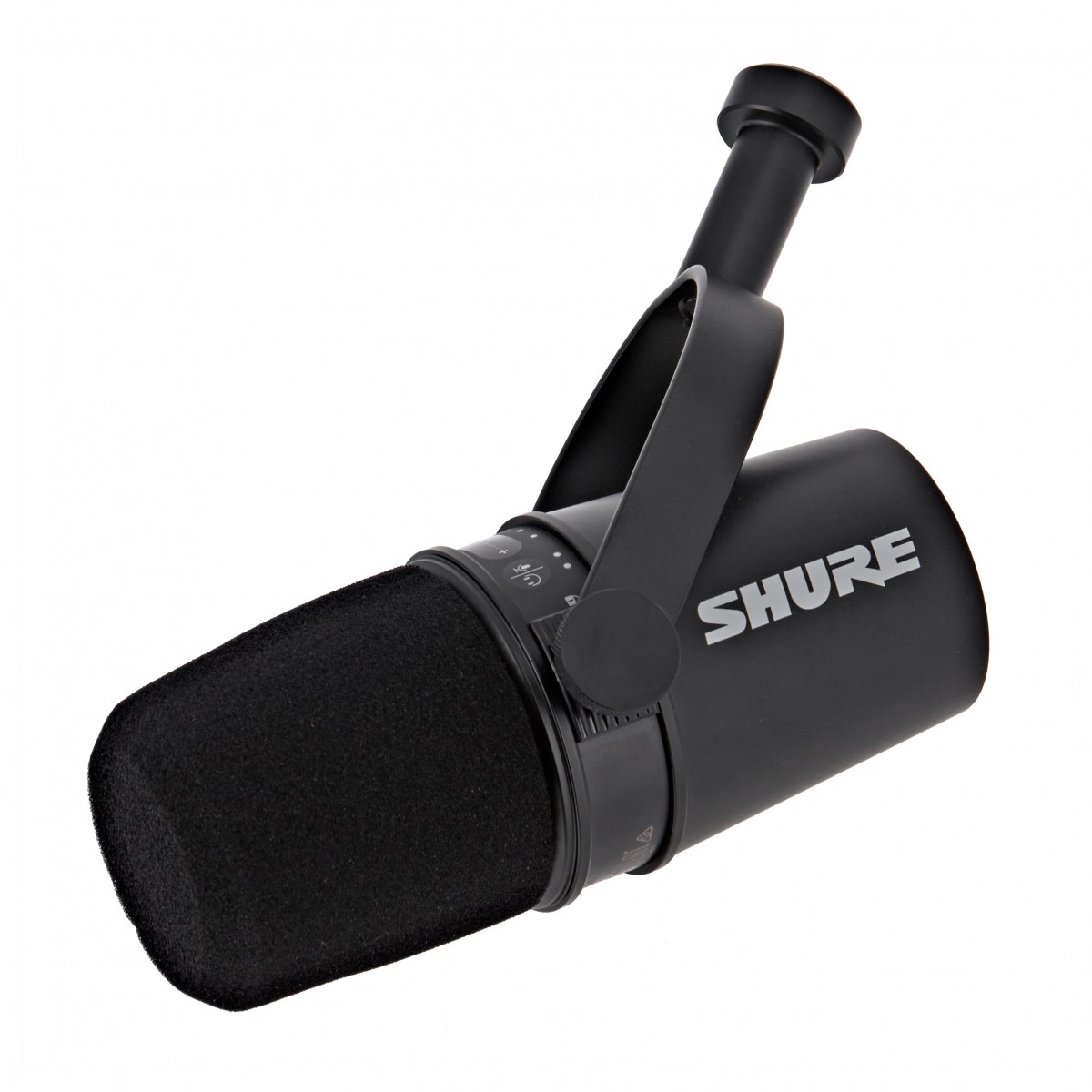 Undeniably inspired by the design of the legendary SM7B, the Shure MV7 is a new and affordable product in Shure's range of microphones, focused on home recording and podcasting. It's often lsited as a 'podcast microphone' so it's perfect for close up vocal recording, and won't get the background sound of your room in it.

What's cool about this microphone is that it can record either through traditional XLR cables or through USB, and it's therefore one of the best budget USB microphones out there. You also get the really great app MOTIV, which is focused on giving you a range of presets for the mic sound aimed at streamers and podcasters. It's also got a nice auto-level feature which means you won't be clipping in your recordings.

While it's definitely at the top end of what we could consider a 'budget' microphone, this is a solid all rounder if you're going to be recording mainly vocals. It will be great for years to come, so if you make all your music in the box but just need a mic to add vocals on top, this is a good option. If you're going to be recording acoustic instruments, then you need a Large Diaphragm Condenser, and the MXL 990 is a great budget optoin in this category. LDCs are necessary on acoustic guitars or pianos because you need to pick up all of the sonic richness in the sound. Condenser microphones are perfect for this, because they pick up a much wider range of the accurate and rich tones of audio than dynamic microphones do.

This is a great option if you're going to be recording acoustic instruments. Nothing picks up an acoustic guitar like a LDC microphone. 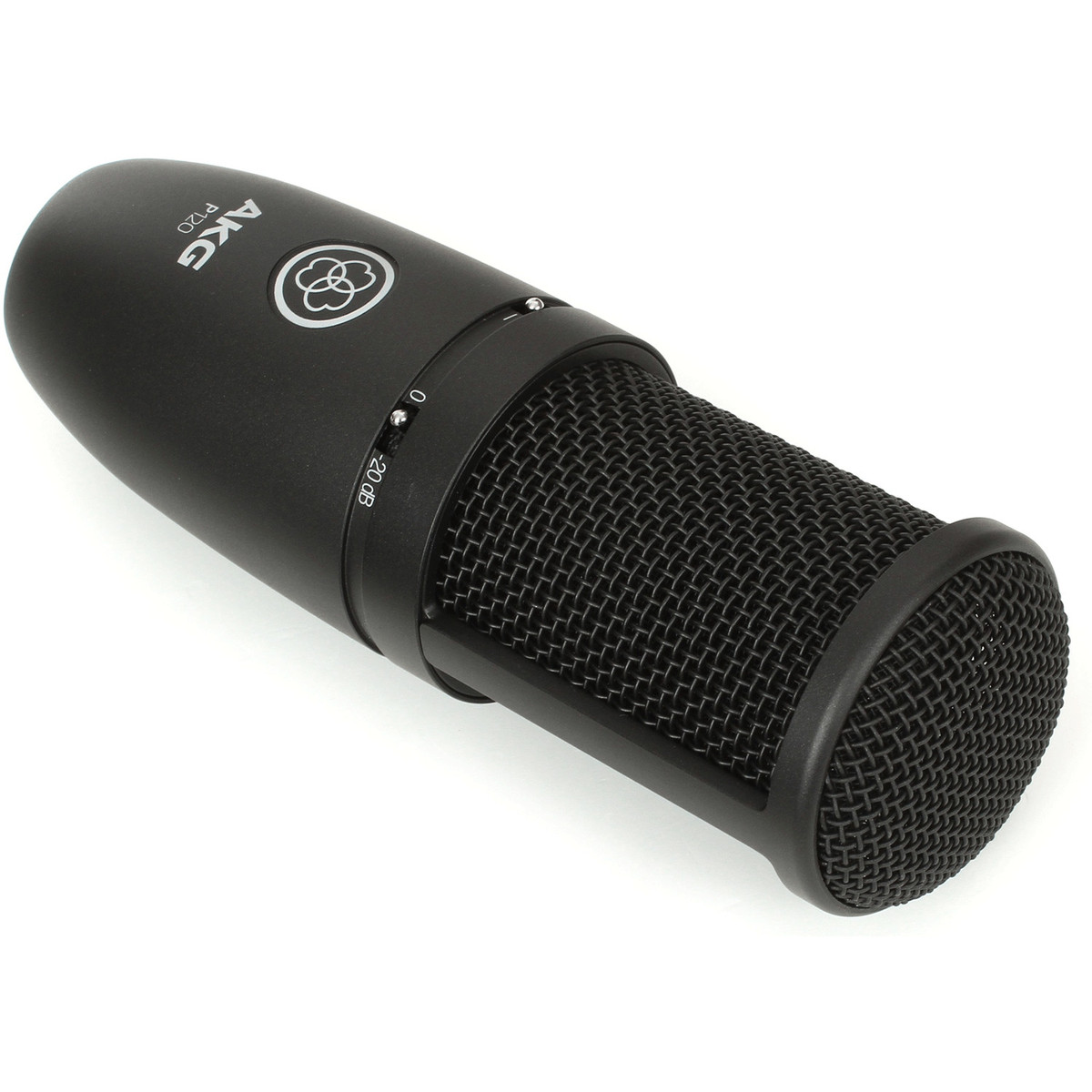 This mic is versatile and well made, and available at a range of prices from different retailers. I saw it as low as £50, and as high as £100+!

If you want something that can handle anything in your home studio, the P120 is a good option. It's a jack-of-all-trades condenser mic, giving a sound that's balanced and clear on vocals and instruments.

The one drawback to this mic is that it doesn't really excel in any one area, so while it is a good all rounder, it's not going to make everything sound great. Microphones like the sE 7, and other small diaphragm condensers like it, are perfect for when you're trying to capture a specific tonality on a sound. This could be cymbals, or the strings on a acoustic guitar. Really anything that has a specific tonal quality that you don't want to be lost on the recording.
This mic is a great example of a mic capable of doing this, with its small diaphragm resulting in a balanced recording that's sonically neutral and lets the authentic sound of the instrument being recorded shine out. This is a microphone which is focused on recording your voice. This doesn't necessarily mean vocals, because it does much better on speech than it does singing, but it's still a decent microphone with a good set of campatbility features.

You can connect it to a laptop or mobile device , and it's ultra portable and a compact size, making it great if you're recording things on the move.

You're also getting a suite of IK Multimedia apps to go with it.

So, that's a selection of some of the best budget microphone options out there. As we mentioned in the beginning, it's worth taking some time before you shop for a microphone to figure out exactly what your needs are.

Do you need something which is going to give you precision and clarity in recording at home?

Do you need something that's portable and durable?

These are obviously two very different situations and figuring out what you're going to be doing with your microphone is the first hurdle.

It's probably going to be between a dynamic microphone and condenser microphone when you're going in at entry level and you're on a budget.

Dynamic microphones are, as we mentioned, robust and reliable. They can take a beating and give great results consistently. There are no moving parts within the mic, which adds to the durability, and they can do well in pretty any environment. They're perfect for live performances.

Condenser microphones, on the other hand, are built for the studio. They're all about giving depth and tonality to recordings, and they're much more fragile than dynamic mics. You can get a lovely warm and rich sound out of them, but you're not going to be wanting to take it around with you everywhere you go.

Another thing you need to consider is whether or not you want a USB microphone. If you do, you'll be able to plug it straight into your laptop and get recording. However, if your microphone of choice requires XLR cables and phantom power, you'll need a dedicated audio interface, which is another cost to consider when setting up your music production and recording gear.

Be careful to ensure you pick the right mic for the job, but in general, you should be getting good recording results with whichever option you pick.

So, thanks for checking out our list of the best microphones on a budget here on Top Music Arts, and while you're here, be sure to head over and check out some of our deals on Ableton Live Project Templates. You can grab these to see how professional tracks are put together and learn the types of production techniques and tricks which make a chart topping tune tick.