If you’ve checked out the first part of this guide on reverb and ambience, chances are you’ll be so clued up on the ins and outs of reverb that you might want to take a break! If you haven’t read it, head over there to check it out and familiarise yourself with the concepts and theories behind reverb.


In this second part of our guide, we are going to explore how you can apply reverb in different contexts in order to create the desired ambience in your music. There are many different types of reverb, from physical reverb units, to analog gear, to software and convolution reverbs. Ultimately, it’s down to you and your artistic choices what reverbs you choose to use in particular scenarios, but let’s go over a few different types of project and how you could apply reverb to them.

Using Reverb in your Mixes


The first point we will consider is using Reverb in the wider context of your mix. In the wider context of the music industry, the trends in what reverbs are used and how much it is applied has changed with the era. In the 80s for example, reverb was a huge focal point. Think Phil Collins’ drums and you know what I mean! You’ll often find reverb on vocals and drums as a main focal point, however it is used across the entire mix spectrum on any instrument!


Today we’ve moved away from the reverb drenched sounds of earlier years with more creative uses, reverb is often used as one shot effects or risers rather than being applied to an entire mix.


Reverb in the mix can be used to create the illusion of stereo width, but they can also create a sense of depth by making some sounds seem ‘further away’ from the listener than others. The closer you are to a sound, the more of the direct sound you hear before the reverb comes back to your ears, and being further away gives the opposite effect.


Again, the use of reverb is largely dependent on your own judgement; at the end of the day, you’re the one making the music, and if you like the sound of, go nuts! However, it’s useful to consider the established principles so you have a jump off point. So let’s discuss reverb on vocals. 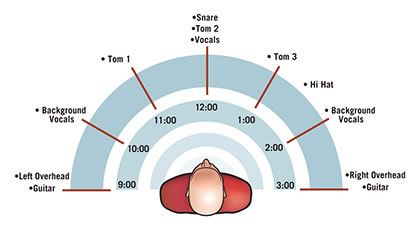 
If you’ve had experience recording and processing vocals, you’ll know that they almost always sound better with reverb on them. As we mentioned in part 1, this will be because we are used to hearing people sing in reverberant environments. Think old time church choirs, medieval monk chants etc, and this is the cultural history that makes us prefer reverb on vocals.


It’s easy to fall into the trap of putting an insane amount of reverb on your vocals; and understandably so, because they sound so good! However, you may be surprised at how little reverb you need to use to actually get good results and ambience. As is often the case with a lot of effects, you may not consciously hear the effect they’re having, but you’d notice the absence if you muted the reverb send.

Typically on vocals, you’ll rarely need a reverb with a super long tail. It just gets messy and can interfere with the rest of your mix. However, if you’re set on using a longer decay time, a good trick is to use a side-chained compressor or a noise gate, and have the vocal trigger the side chain. This way you’re getting clarity on the vocal track as your singer is performing, and then in between phrases the reverb is allowed to swell to its full grandeur. A long reverb time can sound beautiful on vocals when done right!


Some general rules to consider though are that on standard vocal production you wouldn’t usually need a decay time much longer than 1 second or so. You can get the required ambience by adjusting some of the Early Reflections, or maybe even mixing some subtle delay in there.


Longer reverb times are nice as we mentioned above, but you have to bear in mind two things when using them. As a general rule, they will make something sit further back in the mix, and you could potentially lose some intelligibility on the vocals. This is important to bear in mind; you need to know what type of treatment is appropriate for the genre you’re working on. If your song’s focal point is the vocal line, making sure it sits properly in the mix and is clear and understandable are the two most important factors to consider.

Drumming in a stairwell.

Another part of your mix that will need a lot of reverb consideration is the drums. Whether you’re producing music with a real mic’d up drum kit, or you’re using a drum machine or sampler, the principles for reverb on drums are good to know. There’s a famous album where the engineer recorded the drums in a stairwell because of how nice the reverb sounded!


When we are recording a real drum kit, it will often be close mic’d. What this means is that there will be an individual microphone placed on each part of the drum kit. Typically, a kick will have its own mic, as will a snare. The toms usually have dedicated clip-on microphones, and then the cymbals will normally be captured with a pair of overhead microphones, and there are a number of ways you can place these. Hi hats may be mic’d up on their own as well.


The result this gives us, however, is an extremely dry sounding drum recording. Some engineers like to use a room mic on a drum kit, which is an additional microphone (or several) set up in the drum room to capture the overall sound with the room’s ambience, but still, you’ll still have a recording that needs some treatment. Since the only real ambience will come from the room mics or overheads, there’s a lot that needs to be added in post. Perhaps a convolution reverb of a particular studio’s drum room or live room could be a great way to apply reverb to the overheads!


Now let’s take a look at how individual drums sound with reverb on, and explore the principles of each, as they can apply to electronic drums too.


Reverb on Synths and Keyboards

Many of us will be super familiar with synths and keyboard sounds. The nature of DAWs -with their piano rolls as the main melodic input- mean that many of the sounds are keyboard based, just like a lot of real life synthesisers. This is a huge area to cover, and there are millions of different synth sounds out there, so there are no set rules. However, more percussive sounds like marimbas or vibes can sound good with reverb on them.


For synths, you’ll need to consider the built in effects that are already applied to the synth patch. These may need turning down if you want to add different ones. Also, as a general rule, if you have a really lush and thick pad sound, you won’t need to add loads of reverb as it can make your mix sound messy.

What else can you do with Reverb?


As with all things in a music production environment, we as producers have the tools to create unnatural sounding effects that couldn’t happen in nature. This is where you can get super creative and make some really unique sounds. In a previous article I mentioned Valhalla Shimmer, an absolute powerhouse reverb plug in that creates such deep and lush reverb tails that last for ever. There are also pitch controls to set a pitch shift in the reverb tail, so as the sound fades out, the pitch changes too. You can get some lovely sounds with Valhalla Shimmer.


But that’s far from the only example; another great example of an unnatural effect is Gated Reverb. Phil Collins loved using this on his drums; a noise gate is applied so you hear the reverb when the drums are playing, but once the sound goes below a certain threshold, the reverb cuts off. It sounds very unnatural, but can sound great when done right!


You can also use reverse reverb, which is very simple to do in a DAW. All you need to do is record a sound with reverb, and then reverse that recording so it plays leading up to the sound. You can then have the original sound play dry or with reverb, and the result is that the reverb happens “before” the sound, so to speak. This is a great effect to add to ethereal vocals, or to use as a one shot effect to change sections in a track!

Here are a few more tricks you can do with reverb: