It’s now been a while since Ableton released Push 2, and it seems like a gap has opened for a fully integrated controller to take centre stage. Back when Ableton Push was released, the hardware was constructed by Akai, but this was noticeably gone from Push 2, where Ableton brought all of their hardware construction in house.


Akai must have missed creating for Ableton, because they’ve recently released the AKAI Pro Force, an absolute powerhouse of a unit with tonnes of features to unpack. It has a steep price tag at first glance, but when you explore all of its features, you can see the price point matches the product.


So, today with Top Music Arts, we are going to explore all of the features of the AKAI Pro Force. So let’s dive in!

So as you can see, there's on board storage, and SD card slot, as well as slots for USB drives to load samples. It has Bluetooth, CV Outputs, a clip launching matrix, and most important to us; Ableton Link.

In a world where we have tonnes of Samplers, and Tonnes of controllers, there's room for something in the middle. Force works its magic as a standalone Sampler, Sequencer with a display, and it also connects to a computer to work as a Controller. Not only that, you can use Ableton Link to wirelessly control Ableton, meaing Force has a hybrid status as both a standalone device that lets you control Ableton. 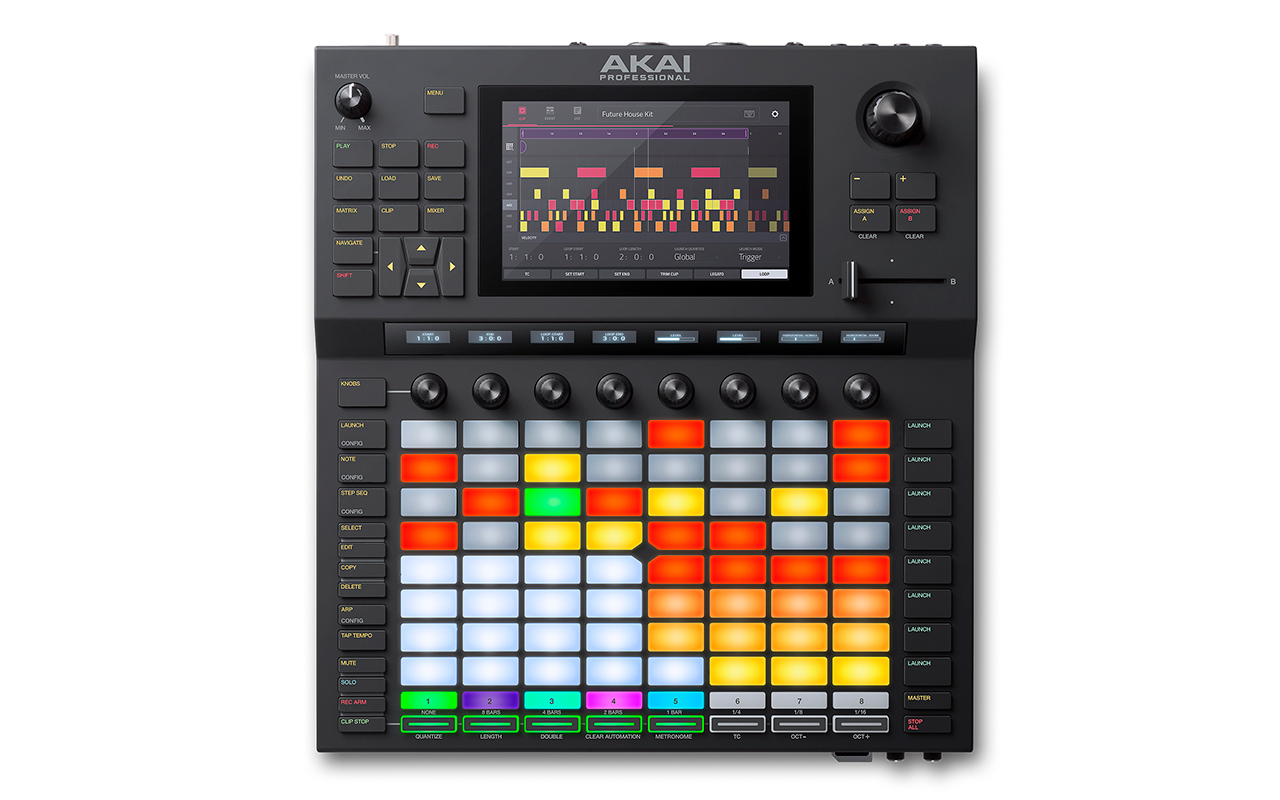 These are an overview of Force's connections:

- knobs for headphone and cue volume

- two USB-A ports for connecting a controller or storage

- a USB-B port for computer connection

There's also a bunch of pre loaded demo projects loaded onto Force, as well as an in print quick start manual, power supply, as the unit weighs in at over 3.75 kilos, so it's a chunky unit to add to your collection! There's a 6.9-inch touch display, 64 backlit RGB pads, and eight knobs aligned at an angle below the display.

For all intents and purposes, without using the Ableton Link, it's almost like a hardware version of Ableton Live, allowing you load clips and scenes together on the unit, along with all the features of a DAW.

Force gives you a myriad of features you'd find in an audio workstation, such as real time sampling, using AKAI's MPC sampling power; the most advanced sample editing capability in modern production. With Force you can trim, crop, chop, process and manipulate samples. Seamlessly assign and layer samples and sequence via Force’s RGB pads or the touch display.

There's also an in built ability to capture that perfect groove, with the on board Step Sequencer, featuring MPC pad modes, MPC Swing and a touch grid editor, capturing and honing your MIDI data is a seamless experience that rivals any DAW.

You can also resample your clips or capture audio from Force’s collection of inputs and discover the endless creative possibilities of looping. Offering functionality for both a studio environment or a live performance situation, there is a great collection of features to bring Looping into your creative sphere.

Force also brings you the ability to take control of your mixes, using the 6.9 inch display screen's touch controls on the Force's screen, allowing you to pan, level, assign FX and route and source audio from within your project or external audio sources. 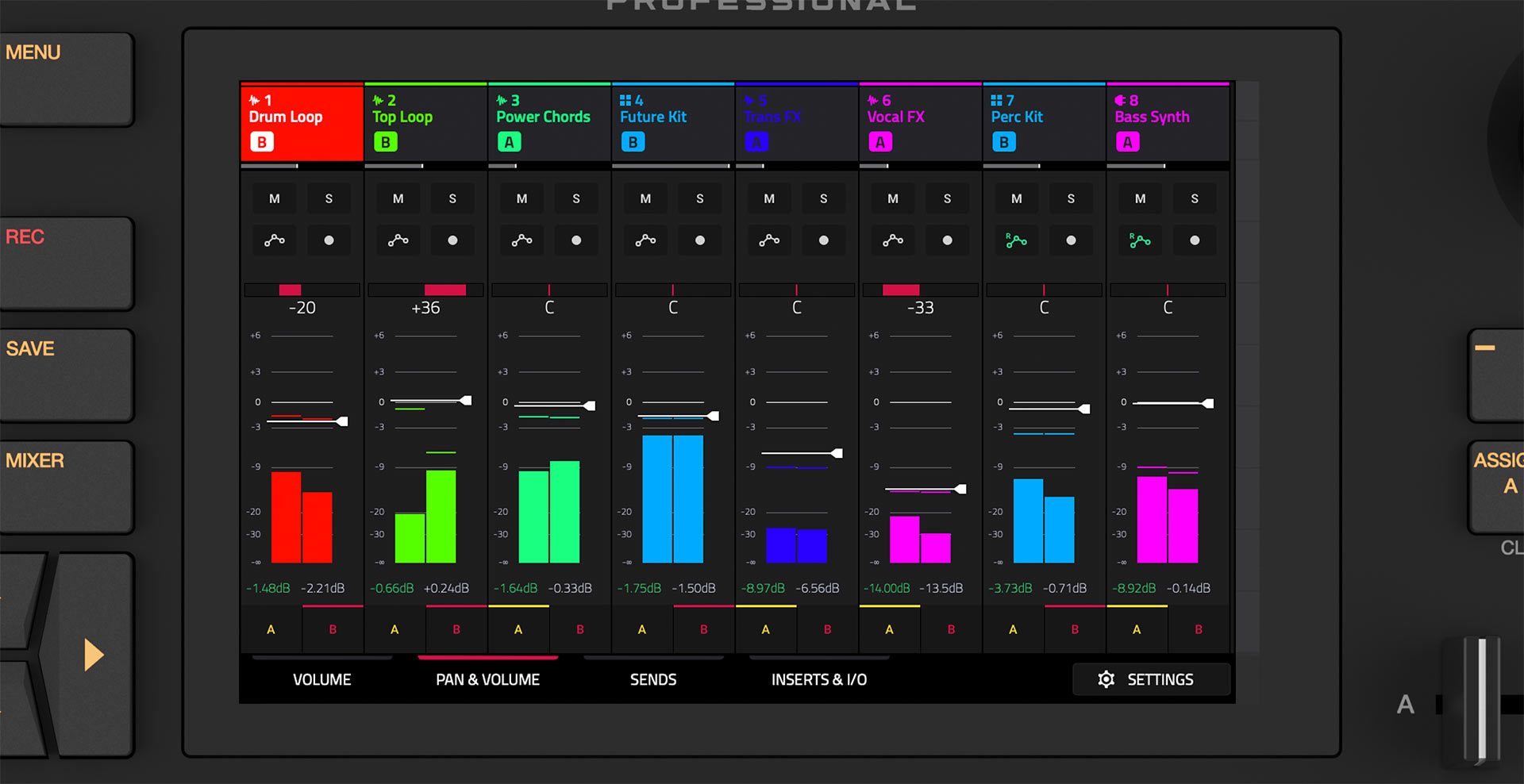 Force is not just a production hub, it's also a perfect tool for your live performance and DJing. Just like within Ableton Live, there is an 8x8 matrix allowing you to import samples, tracks and one shots, giving you the power to mashup and remix your tunes in a live performance environment.

Force also has a Crossfader and Cue Output, allowing you to load in full tracks and use Force for an uncompromised DJing experience. Send your output to a dedicated Cue Mix channel, and with Force's Warping's features, you can be assured that all of your audio is perfectly synced with dual custom real-time time stretch algorithms and auto BPM detection for effortless syncing of all audio within your project to your master BPM.

AKAI Force can also sync with Serato via Link as well, and even with Pioneer’s own Pro DJ Link protocol, via an application called Beat Link Trigger running on a computer, so there is a fully functional DJ controller in your hands, as well as a production hardware module.

When you open a project in Force, it opens Matrix Mode. This is basically similar to Ableton Live’s Session View, where vertical columns represent tracks, and cyclical clips running horizontally. It’s a familiar set up for Live users, and intuitive enough to get to grips with if you’re not versed in how Live organises clips and scenes.

Continuing its similarity to Ableton, clips can be launched individually, or entire rows can be triggered by tapping the corresponding Launch buttons, using either the touch screen or the pads.

There are plenty of options and controls for navigation and performance playback, and Clips are also easily assigned to either the A or B side of the crossfader, where as I mentioned above, they can be used to perform and integrate DJ style elements into your sets.

Force runs Audio, MIDI and external CV tracks to allow you to create a project completely in Force, or by using external instruments too. There are a number of ways to edit your Audio and MIDI data, and the inclusion of the touch screen is another great bonus, allowing you take things much deeper than you can on an Ableton Push, for example.

Again, familiar to users of Push will be how Force handles note input, the grid matrix turning into a chromatic keyboard allowing key locking functions, as well as a similar drum programming system to that on Ableton Push.

Force also has full mixing capabilities, turning the screen into a collection of faders for complete control over the levels, panning, automation and more. You can control your project’s Sends and Returns, as well as the Master Output, and control processors and aux effects across the session.

Force is a greatly impressive standalone system that can effortlessly handle almost every aspect of electronic music creation, sequencing and performance, allowing you to either create an entire track ‘in the box’ as it were, or integrate it into your existing set up.

It does take time to master, but using Force will bring a whole new style of production into your workflow.

While there’s been no official news about a Push 3, the AKAI Pro Force may be the next step if you’re looking to upgrade your controller. It packs a hell of a punch, the use of it as a standalone unit as well as a controller and Ableton Link device are hard to overlook, and then there’s just the aesthetically pleasing nature of the unit itself!

It’s definitely got a bit of a learning curve, and there are some features that may be coming in future updates, but there’s a lot under the lid of this machine.