The MIDI keyboard should be an essential piece of kit if you’re in any way serious about making music on your laptop or IOS device. A piano-style device which allows you to play and record into your DAW using the built in software instruments, a MIDI keyboard will plug in via USB and some even work wirelessly over Bluetooth.


There are a range of options out there to suit all budgets, whether it’s a basic 2 octave mini-keyboard that fits in your backpack, or a top of the range piece of kit with 88 weighted keys, knobs, faders and other functions. There’s a MIDI keyboard out there to suit everyone’s needs. You can get a solid keyboard for less than £100, but then you can look at the higher end keyboards if price is no object.


Many keyboards come with built in software settings to match with your DAW of choice - whether it’s Ableton, Logic or one of the other options. You can be plugged in and ready to go fairly quickly!


So, let’s take a look at 5 of the best keyboards for a range of budgets you can buy right now!

Before we jump in, it’s worth noting that MIDI keyboards broadly come in two sizes.


Smaller, portable models aimed at the on-the-go producer. Maybe you want to take your productions on the move, on the train, to a friend’s house, at a coffee shop? If so, these are the models for you. Despite being small, you can get a great amount of features.


Larger keyboards, which often have piano-style weighted keys, a full range of 88 keys and more gadgets and gizmos attached. These are aimed at the static producer, working from a dedicated studio. They may need to be plugged into the mains as well as into a USB port, and you won’t want to be lugging them around anywhere!


You’ll know what size is best for you, so bearing that in mind, let’s jump in. In no particular order, here is a varied selection of 5 of the best MIDI keyboards on the market right now.


Novation’s MIDI controller is designed for gets a sizeable update


This keyboard is a solid all rounder, developed primarily for Ableton users and featuring a host of updates since its previous model. This keyboard is packed full of features, including  pitch bend and modulation touchstrips, a hardware MIDI out on a TRS jack, really great arpeggiator, a chord memory feature, and it comes bundled with Ableton Live Lite for those of you who aren’t already users!


While it does primarily integrate with Live, this keyboard is usable on all DAWs, so it’s a great option for this ~ £100 price point. 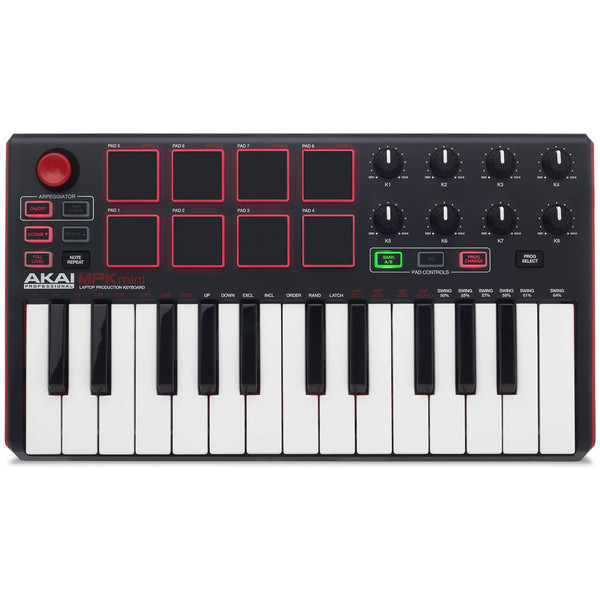 
Akai’s MPK Mini Mk2 is the go to budget MIDI keyboard. It’s been around for a while, and it’s still maintaining its popularity, and for good reason! The blend of keyboard with the MPC style pads, and knobs (which can be assigned to anything using Live) mean this budget friendly controller gives you more than just a keyboard, as with a model such as the Korg MicroKey, for example.


It’s small enough to fit in a laptop bag so it’s perfect for on the move, but it can also hold its own in a studio environment controlling a software instrument.


This is definitely at the top of the budget for most producers, and its lack of the usual piano keys may be a bit off putting for some of the more traditional producers out there, but it’s worth mentioning purely because of how innovative it is. A multi-award winning device; the ROLI Seaboard RISE range introduces a brand new style of playing music. A soft and continuous touch responsive surface has replaced the piano keys, allowing for expressive playing in an entirely new way.


Compatible with most DAWs, and including a bunch of software goodies to unpack, this is an ideal treat for a producer who’s looking to splurge on a new toy.


Fans of Native Instruments will be familiar with their flagship software series Komplete. The Komplete Kontrol S61 MkII is a perfect hardware companion; a smart MIDI keyboard controller that offers pre-mapped control of NI's Komplete instruments. It also features two high res screens, with plenty of function buttons and touch sensitive knobs which allow seamless control of your DAW from the unit itself.


There’s also a really great feature in the Light Guide; RGB lights sit above each and every key, providing contextual information. They highlight scales, key zones, switches and more with beautiful lighting.


You’ll definitely get the most use out of this if you have any of Native Instruments’ products, especially the Komplete series, but with it’s DAW integration options and lovely design, this is a great all rounder.


This is definitely an avant garde controller. Ditching the traditional piano keys for touch responsive, light up pads, you get a controller that’s straight out of left field. The selling point for this controller is its 25 'Smart Sensor' keys, which are velocity-, tilt- and pressure-sensitive, and light up when touched. You can never underestimate the ability of pretty lights to make people want to buy things!


Perfect for your laptop bag, it’s a great addition for a producer who’s looking for remarkably expressive and responsive controls in a MIDI keyboard. If you’re not planning on playing tonnes of piano melodies and chords, this may be the compact little controller for you!

So there you go, 5 varied and versatile MIDI keyboards for all budgets and producers. Whether you’re looking for a studio based, large piano style controller, or a more out there addition to your gear set, there’s something for everyone in this list.


Bear in mind though, as with all things music production, there are hundreds of options out there, and many of the above listed controllers are selected from wider ranges of differing sizes, so if the amount of keys isn’t a huge factor, but the controls are, you may be able to adapt.


A MIDI keyboard should be a key part of any producer’s arsenal, and if you haven’t got one yet, hopefully this article helped you on your search to find one that suits your requirements.


Thanks for checking in with us here at Top Music Arts, and as always, stick around and check out the rest of our site!